The Gift of the Strange 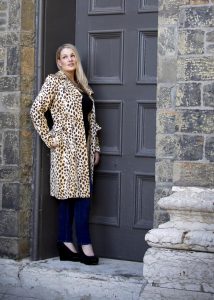 Friend of the Abbey Lily Burana is a novelist and spiritual writer, whose works include: I Love a Man in Uniform: A Memoir of Love, War, and Other Battles; the novel Try; and Strip City: A Stripper’s Farewell Journey Across America. She has written for The Washington Post, GQ, The New York Times, The Los Angeles Times, Entertainment Weekly, the Village Voice, and the New York Observer. She was a contributing editor at New York Magazine and SPIN. Her newest book, “Grace for Amateurs: Field Notes on a Journey Back to Faith” can be ordered here.

I think the most meaningful question we could ask one another is “when did you realize you were never going to be normal?” It’d cut through a lot of chaff and get straight to the heart of things, don’t you think?

Your body may not look, or function, the way most bodies are designed. Maybe it’s your brain (raises hand). Perhaps your tastes run afield of convention; your family journey may not meet the Norman Rockwell ideal and thus be hard for others to understand. Whatever. You’re on the road less traveled, by circumstance or by choice. I’m a fellow traveler on that strange highway, and you’ve got my ear. And my deepest empathy.

Weirdos—can I call us that?—tend to be creative. We process not with our brains, but through our projects. Deep thoughts get sorted at the potter’s wheel; buried truths are unearthed, like sacred treasure, on the blank page. Soul connection is made through the music we space out to, the books we get lost in, the way we plate a sandwich that has potato chips between the slices of bread. We can explore and express the whole, unwieldy range of who we are because we control the way in which it is revealed. Our lives become, in effect, our own stories to tell.

I became a writer because it was the job I could do with the way my brain works—often depressed and anxious to the point of non-function, with an ADHD-like affectation that makes me scattered and daydreamy most days, then beset with laser-like focus that makes it nearly impossible to remember to take out the trash or buy groceries. I’m half Absent-minded Professor, half Sheldon from “The Big Bang Theory.”

“The role of the poet is to stay abnormal,” wrote Brenda Hillman, and while I’m no poet, a poet set me on the path to myself.

When I was a teenager, trying desperately to hang on, to be productive by conventional means, and to even finish high school, I started hanging around punk bands in New York City. Through this loud, wild world, I met a poet named Georgia. Long and skinny, like Thurston Moore by way of Modigliani, Georgia was an ethereal, spiritual man, beset by schizophrenia. He lived on government assistance and state-supplied medication that kept him stable—Haldol be thy name. In his horrible, but rent-controlled, first-floor apartment on Avenue B, he wrote poems in black Sharpie all over the walls, the doors, the windowsills and doorjambs. His roommate, a singer in a popular hardcore punk band, lived in a hole in the wall that had a mattress stuffed into it. (I’m guessing the building had an absentee landlord.) The poems, which poured from him, were of incredible delicacy and quality, and they helped him self-regulate. To connect with the world. He wrote one gem that I copied word for word into a small notebook, about the jet fuel of inspiration, how it burned in him like holy fire. The closing stanza was “Let there be fire, let there be light.” He knew what, and who, he was, and he used his creative gift as a means of connecting himself to a world that barely understood what to make of him and his illness. He taught me how that works, and I vow to carry forward the message by teaching it to anyone and everyone I can.

When I realized I wasn’t going to change—I’m not suited to conventional academic environments, my brain works strangely and I need to accommodate it, rather than torture myself trying to change it—things got simpler, less tense. In twelve-step programs, they love to pass around the saying, “When you follow your own will, things get easier, then they get much harder. When you follow God’s will, things get harder, then they get much easier.”  When you get out of the way of your own weirdness, you’re liberated from the bondage of conformity. Of perfectionism. There’s always the chore of managing your difference—taking your meds, doing your therapy, seeing your doctor, banking your fires to get through the day, or whatever, but that’s regulation, not negation. Stop throwing away energy pretending to be someone you’re not, pretending you’re unbothered by the pain of difference, and instead direct that precious psychic energy toward healing, and pursuing the peculiar glory you were gifted with.

There is an evil, rat-hearted cultural dictate that tells us that our difference is only “worthy” if we can capitalize on it—build it into some type of work that generates money, gathers acclaim, or elevates your status. Make it a brand. But that, I feel, places too much pressure on our differences to perform, rather than to just be. There’s always the strain to produce a silver lining to outsider status. I think that’s chrome-plated bullcrap, and you can’t put a polish on it while I’m around. The pain is the pain is the pain. You don’t need to search for a profit-making, golden pony in the horse poop pile of it all. You don’t need to make your difference into a dancing monkey on a leash. You simply need to befriend it as who you really are, rather than trying to pluck it out like a splinter.

One of my favorite people has a T-shirt she wears often that says, simply, “Black Weirdo.” It’s truth in advertising as a fashion statement. This shirt, this rag-taggy black T-shirt, worn proudly, reminds me that one of the most profound spiritual gifts is self-acceptance. It has, to put it Biblically, a price beyond rubies.

The great writer Diana Butler Bass reminded me the other day that Hildegard of Bingen said we needed two wings to fly—the wing of the sacred and the wing of suffering. Well. Puts things in perspective, doesn’t it? There’s no romanticizing mental illness or any other difference—I know this firsthand. The pain of difference can be acute, the stigma deep and stubborn as a bloodstain. All I’m saying is that there’s a certain kind of freedom that comes from working with the grain of your weird instead of against it. Someone a few bubbles off-center might’ve taught you a valuable lesson once, simply by showing up as who they really are, unhidden and unashamed, and you, by being your own weird self, can teach that lesson to someone else. That’s why we’re who we are—to model for each other how to be in this bewildering world. So remember: When you feel like you’re alone on the outside, you’re a strange and sacred soldier in the army of the Lord. And often a person who looks like a lost cause is really a gateway saint.

A Place at the Table