The Bible in the Work of J. K. Rowling 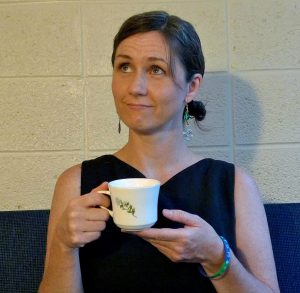 Sara Parks is Assistant Professor in New Testament Studies at the University of Nottingham. Her PhD in Early Judaism and her MA in New Testament and Christian Origins are from McGill University in Montreal. Sara hails from Moncton, New Brunswick—home of the highest tides in the world as well as the most beautiful French. (Désolée, Paris et Montréal!) Sara is a muggle.  (Originally published by Oxford Biblical Studies Online.)

J. K. Rowling (1965- ) is the pen name of Joanne Rowling, the British novelist, film producer, and—most recently—playwright. Although she writes adult detective novels under the pseudonym Robert Galbraith, her global fame came from her Harry Potter series for children and young adults. These novels—published between 1997 and 2007—follow an orphaned boy and his childhood friends through their education at the Hogwarts School of Witchcraft and Wizardry. The schoolchildren come of age amidst dangerous times, as the powerful wizard Lord Voldemort and his bigoted and violent followers determine to kill the boy wizard and dominate the wizarding world through nefarious means. While the seven-book series has been chastised by some for allegedly introducing young people to an interest in the occult, it has also been shown to have been intentionally infused with Christian themes and to echo and cite the Bible.

The Bible and Western Literature

The characters and themes of Jewish and Christian Bibles have thoroughly influenced the Western imagination; biblical tropes and narrative arcs recur not only throughout Western literature and art but even in the ways Westerners process information and perceive the world around them. In the Great Code: The Bible and Literature, Northrop Frye suggested that a reader who is not familiar with the symbol system of the Christian canon (no matter her or his religious persuasion) could scarcely hope to understand Western literature and art at all (Frye 1981). This strong and overarching Frygean connection between the Bible and fiction has been contested by some, especially as newcomers to the West who were not raised on biblical tropes take their place as Western authors and artists. However, if the plethora of biblical-themed responses to the Harry Potter series by novelist J. K. Rowling is any indicator, then Frye’s paradigm certainly seems to hold true, for the Potter universe at least.

Since the publication of the last of the seven Harry Potter novels—in which an abused orphan discovers that he is actually one of the greatest wizards of all time and must save the world from a powerful evil—numerous book-length works (and innumerable web-based fandoms) have analyzed Rowling’s world in conversation with the Bible. Christianity Today declared that “Harry Potter 7 is Matthew 6” (Bruno 2007). Westminster John Knox published Connie Neal’s The Gospel According to Harry Potter, which reveals “glimmers of the Gospel” in each of the seven books in the series (Neal 2008). Father Luke Bell, a Benedictine monk, released his Christian reading of J. K. Rowling, Baptizing Harry Potter (Bell 2010).

The substantial and diverse body of work that uses the Bible as a hermeneutical key to Rowling’s fiction might indicate that the Harry Potter series is deliberately drawing on biblical tropes, or is even an extended allegory, much like C. S. Lewis’ Chronicles of Narnia. On the other hand, similarities between biblical narratives and Rowling’s narrative could (if Frye is correct) simply mean that it is not really possible to craft a compelling story in the Western world without drawing from the rich symbol world of the Hebrew Bible and New Testament, even if inadvertently. Rowling’s series could simply have tapped into a story readily available in our cultural repertoire—the age-old trope of an underdog on the side of good beating a powerful evil against the odds and saving the people from destruction, like Tolkien’s Lord of the Rings series, Lucas’ Star Wars series, and so many others before and since. Yet the use of specific Early Jewish and Christian concepts and themes—the existence of evil, the possibility of reform, the call to forgive, the saving of the people through loving self-sacrifice, a belief in the soul, resurrection, and a just afterlife—seem too clear in Harry Potter to be happenstance.

If Rowling herself is permitted a say in the question, she admits to this latter scenario. She states in a 2007 interview that the New Testament inscriptions from 1 Corinthians 15:26 and Matthew 6:19 on the stones in the graveyard scene of Deathly Hallows (chapter 16), “almost epitomise the whole series” (Adler 2007). While Rowling says she didn’t set out to “do what C. S. Lewis did” (Gibbs 2007), she certainly speaks freely about “undeniably” having woven “a lot of Christian imagery” (Rowling 2010) and Christian themes deeply through the fabric of the novels (Adler 2007). But in addition to the unmistakable presence of scripture within the Potter narrative, there is a second “biblical” phenomenon around Rowling’s work: those readers who treat her texts reverentially and incorporate them into their spiritual practice.

Harry Potter was the single most requested text in Guantanamo Bay prison in 2009 (Pindar 2009) and dropped to third in 2016, only after the Bible and the Qur’an (Hynes 2016). Rowling has noted that her works have been used liturgically and spiritually, not only by Christians but also by those of other faiths (Gibbs 2007). Harry Potter Bible Study aids exist to guide Christians through contemplative practice using the fictional works (Moore 2011). There is no question that readers are connecting the dots from Rowling’s stories to the sacred texts of Western monotheistic heritage.

Harvard Divinity School graduates Vanessa Zoltan and Casper ter Kuile, who guide a group that approaches Rowling’s work as sacred, state that any text to which a community brings rigor, discipline, and expectation will produce blessing. Their popular Harry Potter as Sacred Text group reads and re-reads the series in community, using spiritual and interpretive practices akin to any faith-based study of the Bible. They report that rich individual and collective rewards and “blessing” result from this exercise (Hynes 2016).

Other readers (or, perhaps more likely, non-readers) of Rowling’s work are not such great fans of the Potterverse. Such critics also seem to view Rowling’s fiction in conversation with the Bible; however, they interpret the books as a gateway to the practice of “witchcraft.” Cardinal Ratzinger, while on his way to becoming Pope Benedict XVI, wrote that the books “undermined Christian souls before they could grow properly,” and the official Vatican newspaper, L’Osservatore Romano, labeled Harry Potter “the wrong kind of hero” (Moore and Reynolds 2008). Some Christians might use Harry Potter in Bible study and from the pulpit, study Rowling’s fiction in seminaries, and treat Harry Potter as sacred myth, but many others condemn the books as Satanic or at the very least dangerous to children, and they have even sparked an outbreak of book-burnings (Bosmajian 2006, 136). Such seemingly contradictory reactions are no surprise; they come from a long line of conflicted Judeo-Christian responses to the complex spectrum of beliefs and activities clumsily referred to as “magic” (Hanegraaff 2016).

The World of Magic in Jewish and Christian Antiquity

Tension and ambiguities in Jewish and Christian attitudes toward magic date back to antiquity. Within both traditions, there have always been condemnations of magic existing alongside celebrations of it. For every rabbi or priest who states that good Jews and Christians do not practice magic, there is a piece of ancient or modern evidence to the contrary. Rather than dub such examples as heresy, scholars appreciate that religions are internally diverse and religious identity and experience are complex. They note that the Hebrew Bible is unclear about what constitutes magic, endorsing it in some texts—Joseph is called a “diviner” in Genesis 44:5 and 44:15—while condemning it elsewhere, outlawing Canaanite magical practices while framing similar Israelite practices as non-magical (Schmidt 2002). The various excavations of Jewish and Christian amulets, magical papyri (Betz 1992), and incantation bowls serve as evidence for their widespread use for everyday life by Jews and later Christians from the Second Temple to medieval antiquity (Davila 2001, esp. 245–247). Astute historians note that while Emperor Constantine II enacted harsh measures against magicians (Dickie 2001), post-Constantinian Christian magic, such as protective charms, continued to flourish (Kotanski 2002). A juxtaposition of religion and magic has more to do with defining insider/outsider boundaries than it does with much of a difference in the spectrum of involved beliefs and practices; religion is what one’s own group does, while magic is what the other group does (Hanegraaff 2016). Of course, this is precisely what is going on among contemporary reactions to Rowling. The responses, which range from virtually adding her fiction to religious canons, to burning her books as demonic occult items, tell us as much about the boundary and identity formation of the groups in question as they do about a series of children’s books in which a boy and his friends at a wizard school battle the forces of bigotry, corruption, and chaos, and learn that in vulnerability, diversity, and love, there is strength enough to overcome the most powerful darkness.

A sacred text does not begin as sacred but only becomes so when a community treats it as such in collective agreement. As such, canon is a reading. When a community treats a collection of literature as sacred, they work a kind of magic. Whether inside or outside of the authoritative canons of a religion, the literature that stands the test of time is the literature that works for readers on more than one level. It is literature that is both what it seems and more than what it seems. Great myths, such as the one that unfolded over the course of seven children’s novels, constructed by J. K. Rowling in conversation with her fandom and with the chorus of Western literature that came before her, give rise to the kind of faith and hope that bind communities together and ward off despair. This noble function is the greatest commonality between the texts of the Bible and the fiction of J. K. Rowling.

Schmidt, Brian B. “Canaanite Magic vs. Israelite Religion: Deuteronomy 18 and the Taxonomy of Taboo.” In Magic and Ritual in the Ancient World, edited by Paul Mirecki and Marvin Meyer, 243–262. Leiden, Netherlands: E. J. Brill, 2002.

A Thrill of Hope